Tampalasan is a rules-light rpg for spear-and-sorcery adventures with a Filipino/SEA-ian feel. It is a mod and hack of UVG's skill system, Shadow of the Demon Lord attribute rules, and Best Left Buried's grip and combat system. It is also largely inspired by Chris Fabon's Alamat ng Astig and BJ Recio's Meilakanjan.

This is left unfinished as I am taking the game into a different direction (taking inspiration from Macchiato Monsters for equipment and advancement generation) and the rules might change greatly or minimally. So I'd rather release this alpha version for everyone to read. If you feel like playing it, feel free to contact me to clarify any rules or wordings. And I'd highly appreciate any comments, suggestions, or feedback about this version.

This game has an English and Filipino-Tagalog translation.

Any payments for this game will be used to fuel the development of the newer version, which will be a separate project.

This is almost certainly the lightest weight osr game I've seen. It fits on a page, and there's no bestiary or adventure or anything to go with it, but it has a ton of cool mechanical flourishes.

Skills are pick-or-invent-your-own, attributes are randomly distributed but you'll never have more or less than another player, attack is heavily weighted towards hitting, and there's two HP bars (flesh and grip.)

Per the page description, it's an abandoned project, but I'm intrigued and I'd love to see the new version of the game when it's released.

Thank you! It's not so much as an abandoned project, but just taking it to a different direction. Currently it is version that I like enough to show it off to people, but some aspects of it I wanted to rebuild without making the game too clunky with attaching new mechanics and player options.

I am aiming to update this version to a more complete one to make it playable, like putting short rules for Grip (which is the game's mana and sanity, used for casting spells and abilities), adding more tone-defining concepts to the hinted world/setting, and explaining some of the terms used here like Punyal and Agimat.

Thank you again for checking it out!

I'd absolutely be interested in more setting details, or a sample adventure, or stuff like that, and I'm super glad it's still being worked on.

Apart from maybe a sample adventure or spell list or short bestiary, the thing I'd most be interested in would be a paragraph of what a typical day is like for an average character in the setting. That might help a bunch with describing NPCs, towns, and the environment.

I'm an extremely amateur GM so I'm probably not gonna run anything without some level of suggested adventure and/or evocative bestiary, sure, but that's absent from most OSR-alikes, so honestly the Grip stuff (and maybe a glossary) is the only part of this that feels missing 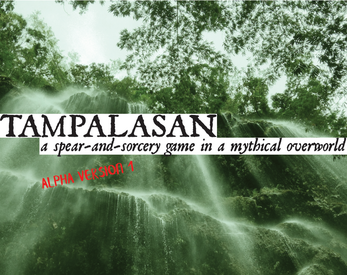